Have a question about how the film was made? Read below, and if you still have questions feel free to email us! 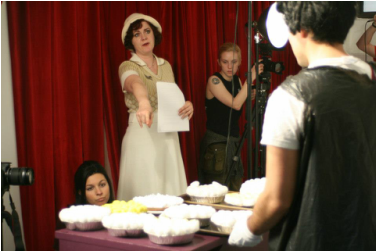 Lisa Hammer: When I performed in Lisa Ferber’s play The Sisters Plotz and Their Afternoon of Will Reading and Poetry, I was so in love with the material that I knew I wanted to film it. I started shooting it as a web series but I knew it needed to be a full feature film. I grew up being obsessed with vintage films, music, and fashion. I always loved the old screwball comedies and musicals, and I jumped at the chance to direct and star in one. But I also have a big fetish for camp films, like those of John Waters and Roger Corman, mixed in with a love of surreal films by Luis Buñuel and Ken Russell. Combining these influences, I really reached for an old-time Technicolor meets low-fi John Waters surrealism feel. I also love the cartoonish quality of the oversaturated color and the use of sight gags from Tom and Jerry and Bugs Bunny cartoons, but in our case, done in live action. We shot black-ash-covered faces after a silly explosion, pie fights, wacky inventions, oversized props, vaudevillian and Busby Berkeley-style dance moves, exaggerated movements, and physical comedy à la the Three Stooges and Marx Brothers. As a director, I prefer to give the actors bold movements, while allowing them to freely express themselves as their characters would in real life. I gave each actor a description of exactly who their character was and what they wanted, and that knowledge of the character’s psyche and personality informed the actors’ choices and their performances. It was so very easy to direct this film, given the incredible talent of the cast and crew, and the wonderful dialogue and lyrics by Lisa Ferber, and the phenomenal music of Mary Feinsinger. This was a once-in-a-lifetime dream come true! 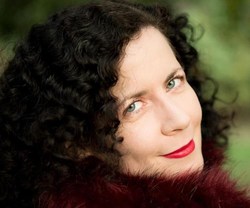 Lisa Ferber: I wrote this film so that I could play with my best friends, sing and dance, and pretend that I am an heiress. Some time ago, I had been joking around with Autumn Whitefield-Madrano, who plays Petula Feather, about other career possibilities and she said, “I’m beginning to think I'd be a brilliant butler. I love to hear gossip and very rarely spread it. Oh, to be granted another life in which to buttle!” I found the whole concept and the world “buttle” hilariously charming, so I stored this in my mind for maybe a year, and when I got the chance to write the short play that led to this film, I jumped on the chance to feature a butler character. As Lisa Hammer and I took the project from a play to a web series to a short film to a feature film, I kept growing happier, because we really developed a family feeling during the filming process. Lisa Hammer and I share a love of camp glamour, so her aesthetic worked perfectly for taking this film up to a sort of cartoon-like level of playfulness. Writing roles for my best friends to play my sisters was incredibly easy, and I got to work with Lisa Hammer’s natural ebullience and Eve Plumb’s clever and dry delivery. I’m very influenced by the 1930s screwball comedies and the history of the artist Florine Stettheimer, who led an eccentric life with her two sisters in the earlier part of the last century, and that inspired the setting too. I never start out writing by deciding what point I’m going to make, yet with all my work, things emerge as I keep going and by the end there is usually a speech that a character makes. In this case I gave the speech to Levi Wilson, who plays Reginald, because he has this effortless-seeming, off-the-cuff smartypants delivery that makes it seem like he’s improvising, which is perfect for my work and really helps convey a reality even with the overall frothiness of this kind of piece. At some point while I was writing this, it became clear to me that the film is about how “family” sometimes means your true friends, which I know is what was going on in my heart. When I found out we passed the Bechdel Test for gender equity, I was very pleased, because to have women’s friendships and our overall existence represented equally is tremendously important. Especially because it wasn’t something I set out to do, it’s just how I think and how this piece organically evolved. I hope that people watch this film and have an absolute ball. Maybe they even cry a little. And then, perhaps, they dance.

Director Lisa Hammer studied silent films as well as vintage color films, and she quickly became obsessed with the look of oversaturated hues often seen in cinema of the 1920s through the mid-1950s. She felt especially taken with the Technicolor film stock used for Gone With the Wind and the color sequences in The Wizard of Oz, and she used these as inspiration for the color in The Sisters Plotz. Lisa also referenced the film noir Laura for lighting and framing. She designed the The Sisters Plotz to also include aspects of an old-time “presentational” theater performance, and as many of the early silent films copied the blocking used for theater, Lisa encouraged the camerawoman on The Sisters Plotz to study frames from silent films as well as film noir.